I know Father’s Day was technically last week, but we are celebrating this weekend instead with a tasty BBQ on Sunday.   So we’re firing up the smoker and doing all the work on Saturday, so we can roll in to my folks place with a bunch of already prepared food and we can spend the time with the family instead of cooking. Here’s a quick run-down of our menu, followed by recipes for the stuff we came up with: Smoked BBQ Beef Brisket (dry rubbed and smoked with apple wood), Brioche Buns (She Simmers), Smoked BBQ Beans, Bread & Butter Pickles, Mango Slaw, and Asparagus and Potato Salad with Riesling-Tarragon Vinaigrette (Food & Wine) END_OF_DOCUMENT_TOKEN_TO_BE_REPLACED 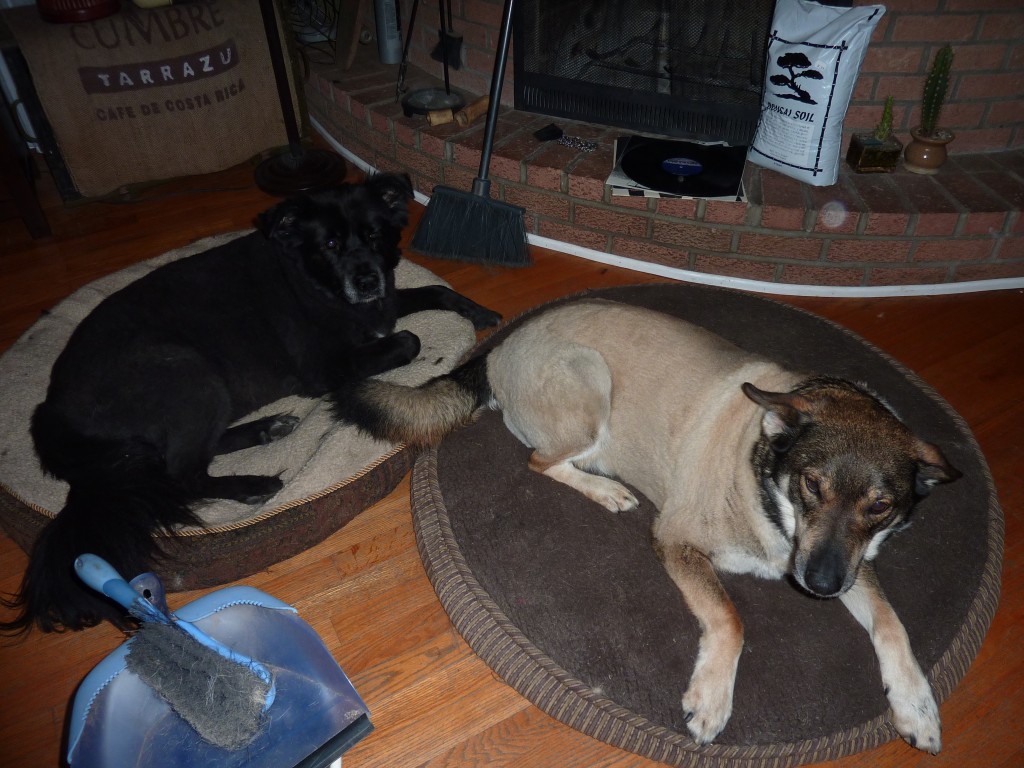 We woke up and found our dogs had given each other haircuts!

Happy Birthday Kitty!  I’m sorry our dinner at Pachamama’s was so horrible for you.   And I’m sorry I didn’t bake you a cake.

Good for veggies, tasty for dogs!

So Cat was heading out to insert these fertilizer spikes into our new garden.  Now our garden consists of the veggies in the ground and a fence surrounding the area made up of wooden stakes and deer netting, which is pretty thin.  Anyways, Cat was heading out, bag in hand, and apparently the Jobes Organics Fertilizer Spikes bag sounds very similar to a Duck Jerkey bag, because Stella’s interest was deeply aroused.  Cat attempted to let Stella smell the spikes, thinking that she would see that there was nothing tasty in the bag.   But Stella found the scent of the fertilizer spikes even more intoxicating than the typical duck jerkey.    We have been eating vegan around the house lately, so I am going to assume that Stella has finally hopped on the bandwagon and wanted to try out some of the tasty new vegan treats.  So Cat put the spikes into the ground and we went along with our day.   A couple hours later, someone had knocked down a weak area of the netting and made their way around the entire garden, digging up delicious fertilizer spikes.  They also destroyed at least one tomato plant, and I think a cucumber plant.

However we never actually caught Stella in the garden, so who knows?   Well cut to today, Sunday morning, Cat heads off to work as I try to sleep in a little bit.    It is very cool for this time of year, and Cat left our sliding glass door in the kitchen open allowing the dogs to freely come and go.   Jack was sleeping in the bedroom with me and I hear him get up and make his way outside.   I remained in bed for around 5 minutes then got up and went outside to check on them.   Stella was at the perimeter of the fence and Jack was full on inside, wandering about.

Jack is sleepy after his big party

So now, I’m not sure who was originally responsible or if both dogs are in it together.   I can see Stella being the mastermind, having Jack do her bidding, but then again…

UPDATE:
Upon smelling the boy and his bodily stank, I feel that my initial thoughts of Stella’s involvement might have been unfounded.

Hey, we have a bunch of products that we have to sell.    Since everything we have is a handmade one of a kind item, we’re switching to Etsy.

Welcome to our new home.  more to come soon.

We will be posting some older photos of various dishes and culinary creations.   Stay tuned.